Great reporting from our friends at the Rural Blog. As Kentucky legislators and university officials consider whether to make the University of Pikeville part of the state college system, it's interesting to see how higher education has boosted one small coal town in southwest Virginia.

How Far Can Money Move Mountains?

GRUNDY, Va., Jan. 7, 2012 — Like other communities in the Central Appalachian coalfield, the small town of Grundy, Va., has suffered decades of dwindling employment opportunities, due in large measure to the area’s reliance on the coal industry.

Coal-related jobs have continued to decrease as mechanization has increased, and coal reserves that are available and efficient to mine are growing shorter. Suffering a substantial outmigration, especially of young adults, local leaders are looking elsewhere for ways to establish sustainable economic development.

Grundy, population 1,100 and the seat of Buchanan County, sits at the confluence of Slate Creek and the Levisa Fork of the Big Sandy River, and the steep topography and narrow valleys have contributed to several detrimental floods that devastated its downtown.

Leaders knew they had to tame these waters for the downtown to remain viable and realize its potential, but realized they ultimately had to take a new approach: higher education.

In 1997, the Appalachian School of Law admitted its first class in a newly renovated building that had once been Grundy’s high school. The idea of ASL began in 1993 when Joe Wolfe, a lawyer in nearby Norton, envisioned bringing a law school to the region. A steering committee of lawyers and business leaders was formed, and leaders in Grundy, approached the committee and offered facilities for the school. Today, the school is fully accredited and has about 350 students and 70 full-time faculty and administrative staff. 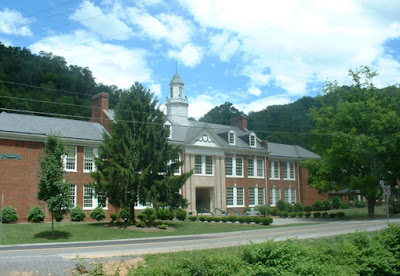 A major part of the rationale for the school was to create opportunities for students in the region to earn a professional degree close to home, while helping fill a need for more lawyers in many rural communities in Central Appalachia.

Leaders also envisioned that the school would produce economic spin-off activity for local businesses. While the school has not transformed the local economy, residents have noticed a substantial effect.

“There is no doubt the law school has had a positive impact economically on Buchanan County,” said Tom Scott, a lawyer and ASL adjunct professor, has practiced law in Grundy for more than 30 years.
“The most profound impact has been on the real estate and food service industries.”

In addition to the influx of students, the local tax and retail base benefit because full-time faculty and staff are required to live in Buchanan County, and that resulted in construction of housing that boosted the economy.

The increase in local government revenue has enabled Grundy to invest in more police and fire protection, water and sewer services and school improvements.

The law school’s success was a springboard for the Appalachian College of Pharmacy. It was a response to a national shortage of pharmacists and the need to improve the health status of Central Appalachia.

The school admitted its first class in spring 2005 and was fully accredited in 2007. It employs approximately 30 faculty and staff and currently has about 200 students.

Recently, the Virginia Coalfield Economic Development Authority secured a $5.6 million loan to speed the development of the Appalachian College of Optometry, planned to be located at the Buchanan Information Park in Grundy.

This third private graduate school is expected to create 66 new jobs with an annual payroll of $7.8 million by its seventh year of operation. It will be one of only 21 optometry schools in the nation. The first class is expected to begin in August of 2013.

Graduate schools are not the only thing changing Grundy. The town is undergoing a substantial flood control project that has virtually re-shaped its downtown. The work is a collaborative effort between the U.S. Army Corps of Engineers, the Grundy Industrial Development Authority, and the Virginia Department of Transportation.

The project includes a floodwall topped by a four-lane highway bypass replacing a winding, two-lane road, creating more potential for business and commerce in the town.

Another aspect of the redevelopment plan was clearing land next to downtown for the Grundy Town Center, which includes a new Walmart. The steep topography forced an innovative approach. The Walmart, which opened in September 2011, sits atop a two-level parking garage, enabling developers to avoid using the limited available flat land for a conventional parking lot.

Walmart is adjacent to Grundy’s main street and the Appalachian School of Law. While most such “big box” stores are located on the outskirts and suburban areas of towns, this one is essentially in the middle of downtown, within walking distance to students and citizens working in town. The additional retail shops of the Grundy Town Center include a Subway, clothing store, sports store and a game shop, among others.

Although the graduate schools, the Grundy Town Center and the flood control project have not cured the ills of poverty in the community overnight, it is a start.

“We must continue to improve our roads and look to attract another major industry to supplement the coal industry and private graduate schools,” Scott said, “but this is a start.”

While it is still too early to adequately measure whether Grundy’s investments have paid off, initial indications are that they are making an impact. In looking forward, it is crucial that Grundy and Buchanan County work to capitalize on the influx of the social and economic capital created by the educational institutions.

Similar rural communities should take note of this town’s innovative approach to development. If ultimately successful, Grundy may become not only a model for strategic economic diversification in Appalachia, but rural America.

Brad Parke, 26, of Hindman, Ky., is a student at the Appalachian School of Law in Grundy, Va.

From Pikeville, Kentucky, Kyle May has lived in small towns for most of his life. From his personal experience identifying as a gay man, he always ... END_OF_DOCUMENT_TOKEN_TO_BE_REPLACED

A training program developed by the Mountain Association is teaching property owners in Eastern Kentucky how to succeed in the home-sharing market. ... END_OF_DOCUMENT_TOKEN_TO_BE_REPLACED