You are here: Home / Uncategorized / How Many Jobs are from Coal?
An article about southwest Virginia in last week’s Washington Post drew the attention of the Daily Yonder when Post reporter Amy Gardner said that the coal industry “provides most of the region’s jobs,” but offered no evidence to support that claim.

Reporters Bill Bishop and Tim Marema use Bureau of Economic Analysis data to point out that in Wise County, where Gardner visited, coal makes up only 11.5 percent of employment. In Kentucky’s largest coal-producing counties, coal makes up between 10 and 20 percent of jobs, as seen in this chart. 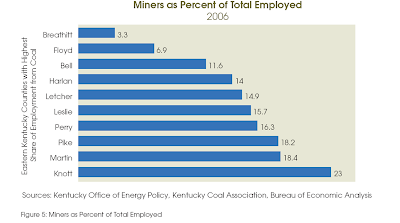 “What’s interesting,” say Bishop and Marema, “is how the national press constantly overstates the importance of coal to the economies of eastern coal states.” They write:

On top of mechanization are newer trends that will only accelerate this employment decline: the rising competitiveness of increasingly cheaper and/or preferred alternatives, including coal from other regions, natural gas, and renewable energy; the diminishing coal reserves in Central Appalachia; and the reality of greater protections from coal’s health and environmental impacts. Read more here and here.

The Mountain Association works to support a just and sustainable transition to a new economy in post-coal Appalachia. We know that a transition such ... END_OF_DOCUMENT_TOKEN_TO_BE_REPLACED

Right down the road from the Anglin Falls trailhead, a popular hiking spot leading to one of Kentucky’s most beautiful waterfalls, Michael Beck and ... END_OF_DOCUMENT_TOKEN_TO_BE_REPLACED

Request for Proposals from Architects